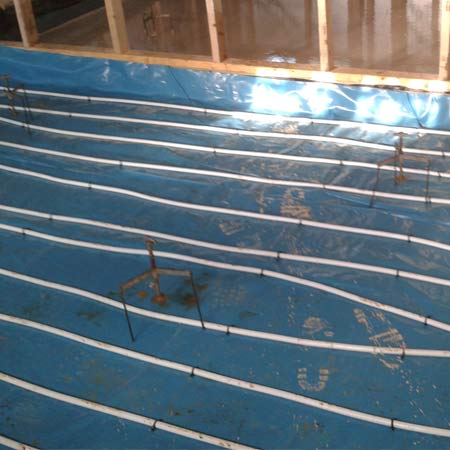 Most homes don’t have underfloor heating and just come with the standard radiators, have you ever wondered why that is? Well, this post will cover the differences between the two and why most homes aren’t built with underfloor heating.

We will go through the differences of these two systems in 5 key points; heat distribution, comfort, cost efficiency, aesthetics and zone heating. Central heating and radiators have been around since the 1930s, whereas underfloor heating is still fairly new and can be added as an extra bit of luxury for your home. Take a look at what kind of differences there are between these two heating systems.

One of the big differences between the two is how the heat itself is distributed. Radiators work by heating their surroundings, when the heat is released it raises to the ceiling, eventually, once that area has warmed up, it will make its way down to the bottom of the room. The distribution of heat from radiators is very uneven, so you’ll find that some areas of a room might be warmer than other areas.

Underfloor heating on the other hand creates radiant heat which helps you to feel warm. This means that there is a much more even distribution of heat when compared to a radiator.

Although you may think that one can’t be more comfortable than the other since heat is just heat, this may be wrong. The heat produced by underfloor heating will be able to warm objects up directly, maintaining a natural humidity in the room, it spreads the heat out evenly across the room. Radiators on the other hand can make certain areas feel stuffy while others may feel cold, the distribution is not as even making some areas of the room uncomfortable.

Radiators were invented almost a century ago as a luxury but technology has changed and there are much more cost-efficient ways of doing things now. Since radiators produce hot and cold spots in the room, it may mean you have to turn your heating up to feel warmer. However, this then means it will eventually get too hot and you will end up having to open a window. It is difficult to stop the room from overheating with radiators. Since underfloor heating distributes the heat evenly and directly, this problem is unlikely to occur meaning it will be much more cost-efficient.

Of course, there is no denying that underfloor heating is the more aesthetically pleasing option, not to mention it gives you more freedom on where to put your furniture as you won’t have to worry about blocking the heat. This helps you to make the most out of your space, radiators, on the other hand, can sometimes get in the way and they don’t really look the nicest.

Heating is much more efficient when it can be heated room by room, with underfloor heating you are able to do this. The heat only needs to be distributed where you need it so you are saving energy and money. Radiators tend to heat up the whole house instead, making it less efficient if you are just trying to heat one room in particular. However, some radiators can be turned off individually, but this all depends on the type of radiator you have.

Why Do Most Homes Come With Radiators?

If underfloor heating is so good, why aren’t new homes being built with this system? It probably comes down to the time and cost it takes to install them. When compared to radiators they are a more complex system to install. Typically they will be more expensive and take longer to install and in a bunch of new builds, they probably don’t have the time or money to be investing in these extras. Despite this, if they are installed they are much cheaper to run and have many benefits.

If you think that you would like to add these as an addition to your home, you can give Paul Villiers a call. We are able to add underfloor heating systems to your home, just give us a call on 01933 270129 today or fill out our online contact form.